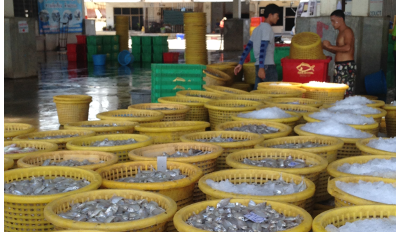 Seafood is the highest traded food commodity in the world and the profits are enormous.

The global trade in seafood relies heavily on migrant labor and unsustainable fishing practices to meet the high demand for low-cost seafood. It is now recognized that forms of human trafficking occur in fishing industries in most part of the world. GLJ-ILRF convenes a global advocacy coalition, the Seafood Working Group, to hold governments and companies accountable and drive change.

Migrant labor makes up much of the workforce on many nations’ fishing fleets in the Asia-Pacific region, where the majority of fish is caught and processed before being exported to the international market. Isolation, legal ambiguities on the high seas, and exploitative labor recruitment make these workers highly vulnerable to human trafficking, forced labor, wage theft and myriad other egregious labor abuses. Fishing is one of the most dangerous of all professions, with an estimated 32,000 fishers killed every year worldwide.

The exploitation of seafood industry workers is the result of global industry efforts to drive down the costs of business and of national legal frameworks and practices that reflect discrimination, deeply entrenched power imbalances — between workers and their employers, and between suppliers and their buyers — and corruption.

Although labor abuse and exploitation have been documented in the fishing fleets and seafood processing factories of nearly all countries with significant trade in seafood products, Thailand has received the bulk of international focus on this issue. Thailand is one of the largest seafood exporters in the world, with the United States as its largest market for canned and processed tuna, shrimp and prawn products. Migrant workers – mostly from neighboring Myanmar, Cambodia, and Laos – staff this economically important export industry. GLJ-ILRF and the Seafood Working Group seek to influence the Thai government to change the laws that leave migrant workers vulnerable, while working with networks of partners inside Thailand and around the world to support workers in speaking out against abusive conditions, and hold the companies that profit from exploitation accountable.

As described in the U.S. government’s Trafficking in Persons Report 2020, workers in the fishing sectors of countries throughout Asia are at serious risk of forced labor and human trafficking, including in Cambodia, China, Indonesia, Japan, Myanmar, Taiwan, Timor-Leste, Thailand, Singapore, South Korea, and Vietnam

Products on U.S. grocery shelves, such as frozen shrimp and canned tuna, have been linked to labor trafficking and child labor.

Thousands of migrant workers cross the border into Thailand each year from neighboring countries, with the greatest numbers coming from Myanmar. An estimated three to four million migrant workers live in Thailand, many of them not registered officially to work. These workers are employed in labor-intensive export industries such as fishing, manufacturing, food processing and agriculture. Media investigations and research over nearly a decade have uncovered human trafficking, child labor, debt bondage, and other egregious forms of labor rights abuses throughout the Thai seafood industry.

Labor registration is complex and leaves migrant workers dependent on recruiters and employers and vulnerable to extortion. Indicators of forced labor are common, including document retention, restriction of movement, debt bondage, withholding of wages and excessive overtime. Local police sometimes overlook abuse, and have even been implicated in trafficking schemes. Discriminatory labor law prevents migrant workers from forming labor unions, leaving them without a voice in the workplace, unable to influence the laws and policies that impact them, and with little access to remedy when employers violate labor laws.

The Thai seafood industry, in particular, has had serious concerns with labor trafficking, child labor, and debt bondage, among other abuses. The International Labor Organization has estimated that nearly 400,000 people are employed in the seafood industry in Thailand, on fishing vessels and in processing facilities, and the majority are foreign migrant workers. Fishing vessels pose the biggest risk to migrant workers. An ILO study released in 2020 found that 14 percent of fishers interviewed and 7 percent of seafood processing workers interviewed were in situations of forced labor.

In response to the international pressure, Thailand has undertaken a series of significant reforms to improve oversight of its fisheries sector and to address widespread abuse and exploitation of migrant labor. Thailand was the first country in Asia to ratify the Protocol of 2014 to the Forced Labour Convention,1930 and the International Labour Organization (ILO) Convention on Work in Fishing No. 188. In 2019, Thailand became the first country in Asia to adopt a National Action plan on Business and Human Rights. The government has made attempts to crack down on illegally operating vessels and increase inspections to ensure all vessels are legally registered and abiding by the law. However, these changes have failed to change the fundamental power imbalance between migrant workers and their employers or to substantively change the reality on the ground for migrant workers, who are still vulnerable to trafficking.

National governments throughout the Asia-Pacific face similar types of human rights abuses against migrant fishers.  In Taiwan, the fishing sector is also powered by Southeast Asian migrant workers, mainly from Indonesia and the Philippines. Taiwan has one of the largest distant water fishing fleets, with over 1,800 vessels flying the Taiwanese flag operating across all of the world’s oceans and hundreds of Taiwanese-owned vessels flying other flags. Taiwan is home to Fong Chun Formosa Fishery Company, Ltd. (FCF), which has been ranked as one of the top three tuna traders in the world and recently purchased canned tuna company Bumble Bee. In recent years, investigations have revealed shocking cases of human rights abuses in fisheries, including forced labor and human trafficking. Similar to Thailand, migrant fishermen in Taiwan face high recruitment fees and wages deductions, creating a bonded labor workforce where individuals are deterred from leaving. They sleep in squalid conditions onboard vessels and do not have access to sufficient food or clean water, even when at port.

In addition to Thailand and Taiwan, nine other countries in Asia are among the world’s top 25 major seafood producing countries, including China, Indonesia, India, Vietnam, Japan, the Philippines, Malaysia, the Republic of Korea and Myanmar.

Vulnerable communities are best protected when they are able to protect themselves.

As stories continue to surface about workers being trafficked onto fishing vessels, industry actors are looking for answers. Governments are also under pressure to increase oversight mechanisms. Despite increasing funding, good intentions and exciting momentum, many of the solutions being developed do not address the underlying vulnerability of seafood workers, and thus cannot provide long-term relief. Better solutions must be grounded in actions that shift the power dynamic to foster genuine worker voice.

We advocate for all workers to have internationally-recognized labor rights, which include rights to freedom of association and collective bargaining; the elimination of all forms of forced or compulsory labor; the effective abolition and remediation of child labor; and the elimination of discrimination in respect of employment and occupation. Governments and corporations have an obligation to ensure that workers have these basic rights, yet there are significant gaps in Thailand. We outline the most critical legal and industry reforms needed in, Ending Labor Abuse and Exploitation in the Thai Seafood Industry: Six Things Seafood Buyers Should be Asking of the Thai Government & Suppliers. The asks are focused around six themes:

6. Ending violence and harassment in the world of work.

In the seafood sector more broadly, we believe that programs which claim to certify or promote “social sustainability” of seafood supply chains must establish binding mechanisms for industry improvement with a space for workers themselves to lead standard-setting, monitoring and enforcement. GLJ-ILRF is committed to promoting the fundamental changes required to address inadequate worker protections and ending common industry practices that fuel labor exploitation. We have multiple initiatives to accomplish those goals:

1. Promote worker-centered approaches to advancing labor rights through the Essential Elements for Effective Social Responsibility in the Seafood Sector.

3. Prepare an annual submission to the U.S. Department of State concerning the ranking of Thailand in the annual Trafficking in Persons Report, including in 2020.

The Seafood Working Group (SWG) is a global coalition of human rights, labor and environmental organizations that work together to develop and advocate for effective government policies and industry actions to end the related problems of labor exploitation, illegal fishing and overfishing in the international seafood trade. Founded in 2014 together with the support of Humanity United, the SWG is convened by Global Labor Justice - International Labor Rights Forum (GLJ-ILRF) and is led by an Advisory Body of leading organizations in these fields.

The impetus for the SWG is our understanding that labor exploitation is often integrally linked to illegal and unsustainable practices in the seafood industry. Our membership includes environmental groups which have spent decades campaigning for practices that protect marine environments, and possess knowledge that can support campaigns for just working conditions and vice versa. It is only by working together, with environmental, human rights, and labor organizations each contributing based on their unique expertise, that comprehensive solutions can be developed to fundamentally move the seafood sector towards more sustainable, rights-respecting practices.

The Working Group is led by an advisory body of leading labor, human rights and environmental organizations that help determine the strategic advocacy priorities of the coalition and guide its expansion to support workers in the seafood industry throughout Asia.  The current members of the Advisory Body are:

The Working Group has produced several significant outcomes in its six years, including:

The Migrant Workers Rights Network (MWRN) is a membership-based organization of over 4,000 migrant workers from Myanmar residing and working mainly in Thailand. In March 2009, a group of nine migrant leaders from Myanmar founded the organization to improve the quality of life for migrant workers through community empowerment and increased access to justice. MWRN was founded to promote and strengthen Myanmar migrant workers’ rights by raising awareness for their concerns, promoting access to justice by negotiating with employers and government officials, and advocating for policy change. Though it is not permitted to be a union under Thai law, MWRN is a representative organization in which members democratically elect leaders to represent their interests. MWRN was the winner of the 2013 International Labor Rights Award, which is given annually to recognize the significant contributions of labor rights advocates toward achieving just and humane treatment for workers worldwide.

Mr. Sein Htay is the President of MWRN and has grown the organization into the largest grassroots member-based migrant worker association in Thailand.

All IGLJ-ILRF and Seafood Working Group advocacy statements, submissions and publications on Thailand may found here and some key resources are below: